It seems to be a constant pattern with us and social media. We're here, then we will disappear for a bit. I guess I can't maintain it.

As the look of things, it doesn't seem like any of our Shiba pals have been updating their blog either. Meaning... there's probably nobody reading this - but that's OK! It'll be nice looking back on this blog and reread what I've posted about sweet Yuki... If I actually maintain this.

But what has been happening lately?

On the night of July 26th, her hudad was knocked out asleep while I was meditating to some binaural waves with my headphones on. Out of the blue I hear Yuki screaming and howling in pain through my meditation.

She's foaming at the mouth and she can't seem to get up from her position. We wiped her mouth and tried to comfort her by petting her. Since the 8 years we've had her, this has never happened before. So, we had decided to take her to the Emergency Vet. As I tried to slip on her harness, she limped away and sat under the table & growled at me.

When we FINALLY were able to get the harness on her, we walked to the car, and that was when i realized she had lost her vision. She had no clue where she was going as she was zig-zagging to the car.

While we were driving to the vet with Yuki in my arms, she just freaked out and was trying to get out. I tried to soothe her by talking calmly and petting her.

Her first blood work showed that her liver enzymes were above 700. 160 is supposed to be her normal. She was also blind. They said she had a seizure.


The next day, the Vet told us she had a second seizure - that's 2 in less than 10 hours. They had concluded she had Acute Liver Toxicity and must have gotten into something she wasn't supposed to. She did gain her sight back a couple of hours after the seizure.

She had to stay a second night to do more blood work and tests. The next day, we met with the vet regarding updates on her condition. Her liver enzymes shot up to OVER 1000, which the machine could have only read up to - so we didn't have an exact number. It could've been 1001 or 2000. She explained to us each medication she had to take: Keppra, Clindamycin, Denamarin and Enrofloxacin.

We were able to take Yuki home that day. As you can see, she's enjoying the breeze from the car ride and wasn't antsy at all. We were so happy she's back with us.

Since then, we have been trying to figure out what it could have been that she's gotten into. We did A LOT of research on ingredients and what was new. Here were the possibilities that we had narrowed down to:
Diet changes and any updates will be posted on the next blog. Until then, hope everyone out there is healthy, safe and doing well!
at August 12, 2017

It seems to be a constant pattern with us and social media. We're here, then we will disappear for a bit. I guess I can't maintain ... 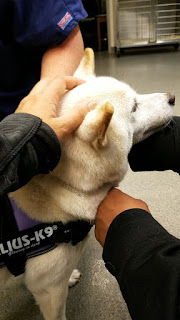 jules
Yuki was adopted on April 14th '09. She's a work in progress!